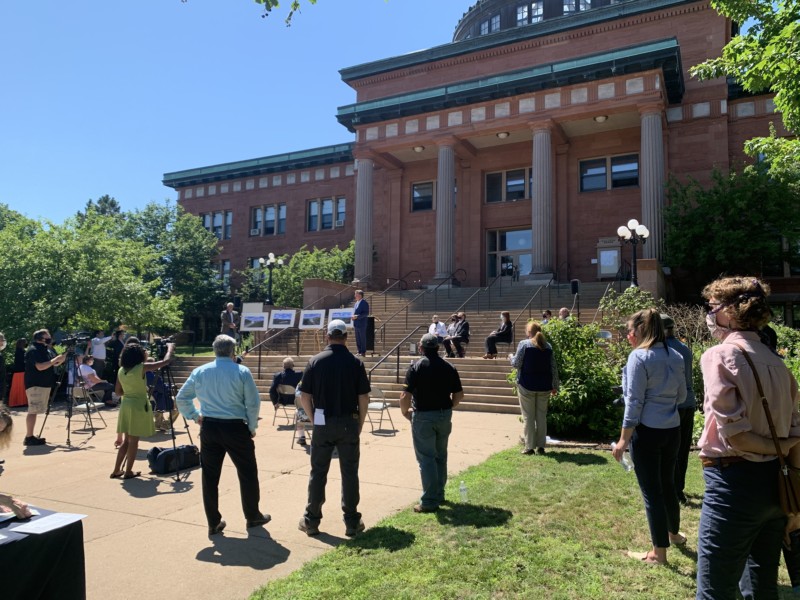 MARQUETTE – The Michigan Launch Initiative, an effort led by the Michigan Aerospace Manufacturers Association (MAMA), is moving forward with a vertical launch site and autonomous vehicle proving grounds to be located in the Upper Peninsula of Michigan.   While the process began over a year ago to find the perfect site, in January of this year the Chippewa County EDC and Marquette County jointly submitted a letter of cooperation with a collaborative goal to establish a premier case for the Upper Peninsula to become a licensed spaceport and demonstrate the cooperative foundation that exists in the region. As a result, the vertical launch site will be located in Marquette County and the autonomous vehicle proving grounds will be located in Chippewa County.   The decision was announced Thursday, July 23, 2020 by Gavin Brown, CEO, MAMA after a long and arduous review process analyzing all attributes of the various sites vying for the title, with safety being the number one criterion.   “If you look at minimal population density, access to water, launch trajectories, things of those nature that are associated with launches, the northern part of our great state actually serves very well for this.” Brown said.   The two locations will become part of MAMA’s Michigan Launch Initiative, which also includes Oscoda-Wurtsmith Airport which was announced earlier this year as the location for horizontal launches.   “Today is only a step forward,” Brown explained, “but it is an important and vital step toward securing Michigan’s foothold in the space industry.”   The initiative has been moving towards licensure from the Federal Aviation Administration which needs to be obtained prior to development of the sites.   “The selection of a vertical launch site in the Upper Peninsula creates the potential for the region to become a principal in low earth orbit satellite and autonomous vehicle technology,” explained Chris Olson, President, Chippewa County Economic Development Corporation. “The resulting economic impact to the U.P. and the entire state will be significant.”   Commissioner Chairman Gerald Corkin who represents Marquette County said he expects the launch site to have a big economic impact, including more job opportunities for not just Marquette County but the entire Upper Peninsula.   “This is a great opportunity for the Upper Peninsula and we could not have achieved it without the support of our state and federal legislators, County staff, the Lake Superior Community Partnership private partners like Telkite Enterprises LLC, Artemis Energy LLC, Explorer Solutions, LaDolce Video, Lucid Coast and many more.”   Brown reiterated the growth opportunities and mentioned several existing aerospace companies currently operating across the Upper Peninsula and its Canadian counterpart such as Orbion Space, GES Engineering, REL, Inc., Northern Wings Repair, Creative Composites, Springer Aerospace, Humphrey Aircraft Services, to name a few were another attractive component to the site selection process.   Troy Morris, Director of Operations for Kall Morris Inc., a Michigan-based startup working to solve the global issue of space debris demonstrated how the business of space is already working in Michigan. Founded by fellow graduates of Northern Michigan University, these alumni are working to build and operate spacecraft for debris removal. “Keeping space clear for all builds the foundation for humanity’s continued expansion into space. Thanks to the support of the state government, organizations, and people involved in the growing aerospace sector, exciting developments like the Michigan Launch Initiative continue to support the path to success. KMI is excited to work with Michigan and the Upper Peninsula as the region plays a part in this exciting future.” Morris said.   “We are already seeing increased interest in locating at Sawyer International Airport from outside the area. We are currently hosting a development company and talking to a telecommunications business about services that will be needed to support the spaceport initiatives,” said Amy Clickner, CEO Lake Superior Community Partnership. “This is a real game-changer.”   As part of MAMA’s effort to develop Michigan’s space industry, it will be hosting the Third Annual North American Space Summit in Traverse City, Michigan, August 30-September 2. This event provides attendees a superb networking opportunity with those leading the space race, learn about the latest advancements in rules, regulations, technology, and promote their business interests. For more information visit www.TheNASS.org.